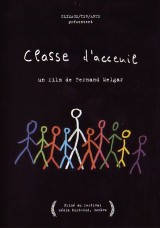 June 1997: 14 students, aged from 11 to 17, share the benches in Anne Juri’s induction class in Marcolet High School in Crissier. A mix of Catholic and Muslim kids, the class is a melting pot of Kurds, Bosnians, Portuguese and Brazilians. Some children have come to join their parents, who work as seasonal workers and whose work visas had not enabled them to bring their children before now. The others fled the war in Bosnia and are temporarily living in detention centres for asylum seekers. After a year of living in such close quarters, some of them were housed in apartments in areas with subsidised rent, where they and their unworking parents were faced with hostile neighbours, who were both Swiss and long-standing immigrants themselves. These children are getting a taste for the new life available to them in Switzerland, which they idealise and discover during a school class in the Alps. The special moments they share with their teacher make them forget the uncertainty of tomorrow: imminent repatriation for the Bosnian refugees and a limited professional future for the others.

Interweaving images of an idyllic Swiss woman with a much less utopian reality, this film depicts the world of these young adolescents, who are torn between memories of their homelands and the desire to build lives for themselves in Switzerland. How do you learn to read and write in another language when you never even learned in your own language? How do you appreciate the joy of learning when you constantly see your father being killed before your eyes? And why bother at all if you’re going to be repatriated in six months anyway? Through six portraits, “Induction Class” shows the harsh reality facing these children and their redefined families.

In their quest for new identities, these children do not understand that they are in a country that seems to have lost its own sense of identity and has forgotten that pluralism and diversity are at the very heart of its constitution.