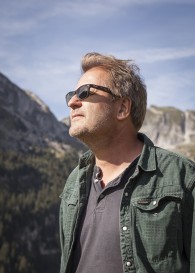 Born in 1965 in Lausanne, Stéphane Goël worked as an independent editor and director from 1985. He then went to New York for six years where he trained in documentaries with John Reilly and Julie Gustafson at the Global Village Experimental Center and collaborated on experimental and poetic videos, with artists and filmmakers like Nam June Paik, Alexander Hahn, Shigeko Kubota. Back in Switzerland, he joined the Climage collective in which he produced and directed numerous documentaries for cinema and television. Curious and eclectic, his films explore utopias and tell about emigration, the quest for Paradise, the transformation of the rural world, the commitment to solidarity, the fight for women or worker’s rights, with a strong inclination for history and personal stories.